Wealth is more than just jobs. It includes annual median income, homeownership, access to a college education, access to workplace or self-employment retirement plans, and more. On nearly every measure, local racial wealth disparities are evident. This is true for traditional economic measures like banking, housing, and employment, as well as other measures that have a direct impact on the ability of individuals and families to earn good income and build wealth.

In Louisiana, nearly 900,000 households – nearly 20% – struggled to afford basic household necessities in 2018. With the cost of living higher than what most wages pay, ALICE families – an acronym for Asset Limited, Income Constrained, Employed – work hard and earn just above the Federal Poverty Level (FPL), but not enough to afford a basic household budget of housing, child care, food, transportation, and health care. ALICE households live in every county in Louisiana – urban, suburban, and rural – and they include women and men, young and old, of all races and ethnicities.

“Between 2007 and 2018, Louisiana experienced steady economic improvements according to traditional measures. Unemployment in the state, as well as across the U.S., fell to historic lows, GDP grew, and wages rose slightly. Yet in 2018, 51% of households still struggled to make ends meet. While 18% of these struggling households were living below the Federal Poverty Level (FPL), another 33% were ALICE: Asset Limited, Income Constrained, Employed. These households earned above the FPL, but not enough to afford basic household necessities.”

Trends identified by the 2019 ALICE Report are the following: 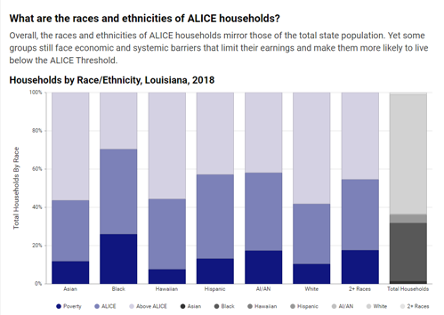 See the Louisiana ALICE Report to learn more about the financial hardships experienced by ALICE households. Study: Well-being gaps between African Americans and whites are result of policy decisions

Gain a better understanding of systematic inequity and economic opportunity at Center for American Progress.

Share your reflections on today’s topic on social media using the hashtag #equitychallenge and tag @UnitedWayNWLA. 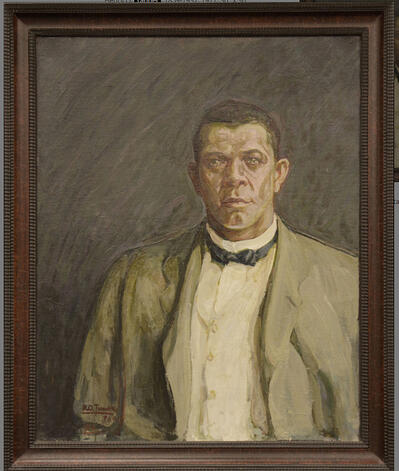 Description: This work is a posthumous portrait of Booker T. Washington commissioned by the Iowa State Federation of Colored Women’s Clubs from internationally-significant Black artist Henry O. Tanner. It was acquired to increase Black representation in the portrait gallery of the State Historical Museum of Iowa. According to the Iowa State Bystander of March 30, 1917, it was to be first shown at the annual meeting of the Iowa State Federation of Colored Women’s Clubs from May 21-23, 1917 in Ottumwa. By May 24, 1917 it was installed at the State Historical Building. (Iowa State Bystander, June 1, 1917) An article of March 30, 1917 stated the purchase price of the work was to be $500.00. In correspondence to Susan Brown, Tanner said the usual charge was $1,000.00 but for the purpose of this work he would reduce his fee.

“Booker T. Washington was a leader for Blacks but was controversial for his tolerance of segregation while advocating for Black acceptance. Henry Tanner lived in Paris to avoid discrimination. This art asks how to protest and support equality and inclusion. What compromises have you made? How can you confront injustice?”