“To teach in a manner that respects and cares
for the souls of our students is essential if we
are to provide the necessary conditions where
learning can most deeply and intimately begin.”

In 1954, the United States Supreme Court’s decision in Brown v. Board of Education effectively dismantled the legacy of Jim Crow. The Justices ruled unanimously that racial segregation of children in public schools was unconstitutional. Unfortunately, progress is reversible. Even schools that were successfully desegregated are again racially segregated.

Today, more than half of the nation’s school-age children are in racially concentrated districts in which over 75% of students are of the same race, and districts are further segregated by income. In fact, economic segregation and racial segregation have intensified the educational disparities between the rich and the poor, and the Black and the White.

This is true nationally as well as in Northwest Louisiana. Of the 92,372 students enrolled in all of the Northwest Louisiana public schools (Bienville, Bossier, Caddo, Claiborne, De Soto, Natchitoches, Red River, Sabine, Webster and Winn Parishes) nearly 60% are students of color and 63% of these students are eligible for free and reduced lunch. Educational inequities remain one of the main barriers to equality for all. 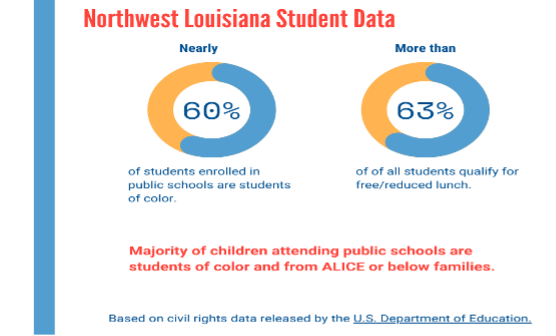 Watch How America’s Public Schools Keep Kids in Poverty, a TED Talk with Kandice Sumner. “We sit and we keep banging our heads against this term —’achievement gap’…I think we, as Gloria Ladson-Billings says, should flip our paradigm and our language and call it what it really is. It’s not an achievement gap; it’s an education debt, for all of the foregone schooling resources that were never invested in the education of the Black and Brown child over time.” (13:42) During this time when students and teachers must adapt to distance learning, it’s especially important to prepare students to be independent learners. Find out more by listening to Apollo 13’ing it with Zaretta Hammond, an episode of Vrain Waves: Teaching Conversations with Minds Shaping Education. Zaretta Hammond, author of Culturally Responsive Teaching and the Brain, explores the importance of independent learning, along with what relationship-building really means and how educators can be more effective collaborating with families. (Full episode with introduction is 49:05 or start with her interview at 6:10.)

Make a commitment to learn about what it truly means to be anti-racist AND make the commitment to engage in anti-racist behavior. Whether you’re an educator or not, find some helpful ideas in How to Be an Antiracist Educator, by Dena Simmons.

Read The Black Male Teacher Experience, by Willie Williams, Jr., a book that details the life of a Black male teacher who is not only trying to educate and make a better life for the students around him, but is also attempting to remain true to who he is. 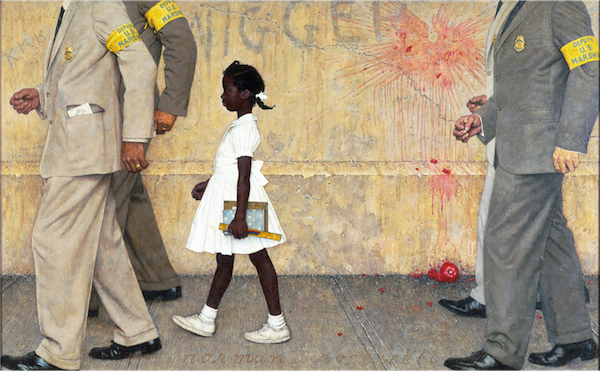 Artist: Norman Rockwell   •   Title: The Problem We All Live With

A special thanks to the Norman Rockwell Museum for providing this art.