Now is the time for equity in early childhood education!

No matter the adverse conditions under which Black people have found themselves, they have excelled in many ways, including academically. In 1879, Harriett Beecher-Stowe observed that right out of slavery, Black people’s enthusiasm and impulse was not for plunder or for revenge, or for drink, or any form of animal indulgence, but for education.

Not only have Black people historically valued education, research confirms their innate capability to excel. Studies show that there is no achievement gap at birth—at least not one that highlights differences between European-American children and Black children. According to research, Black children outperform their white counterparts on most measures until they start school. (Source: Delpit, L. (2012). Multiplication is for White People: Raising Expectations for Other People’s Children. New York, NY: The New Press.)

Then, what happens? Unfortunately, “deficit thinking” can come into play for some educators. It is a frame through which the Black child can be viewed as either being intellectually inferior, or inept because of their culture. For these teachers, this framing device allows them to blame factors such as poverty instead of examining and changing lesson plans. PreK Teach and Play: A Lesson in Humility: Diving into Anti-Racist Early Education Practices and Policies with Kristie Pretti-Frontczak and Ijumaa Jordan. Ijumaa and Kristie discuss developing humility with young students, how the white dominant culture shows up in early childhood practices and policies, and ways educators can examine their own beliefs and practices to work towards being antiracist. (01:01:57)

Bias Isn’t Just a Police Problem, It’s A Preschool Problem, an NPR ED podcast with Cory Turner that examines the issue of implicit bias in preschool teachers and sheds light on how subconscious racial stereotypes related to students of color guide the expectations and interactions of teachers, and the negative effects of these beliefs. (4:32)

This clip from Anderson Cooper 360, which reveals children’s attitudes and biases toward race. With the help of Dr. Margaret Beale Spencer, renowned child psychologist and University of Chicago researcher, CNN recreates the groundbreaking “doll test” from the 1940s performed by Mamie and Kenneth Clark, a husband-and-wife team of Black psychologists who devoted their life’s work to understanding and helping heal children’s racial biases. (5:27)

Children watch and listen to adults for racial cues. Get conversation going with this age-appropriate guide for talking to very young children about race, and for reading time, choose a culturally responsive book, like the ones at Lee & Low Books About Everyone, For Everyone. 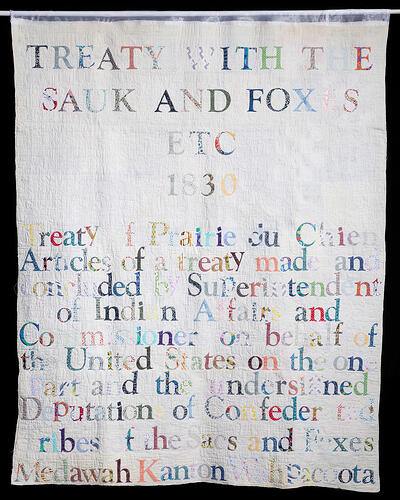 Title: Treaty with the Sauk and Foxes, 1830 Broken Treaty Quilt

“Gina Adams’ life’s work is to create a quilt for every broken treaty between various colonial governments and the indigenous nations of North America. The hand-sewn letters on each quilt replicate the language of the treaties; this quilt includes the language of the treaty between Iowa’s Sauk and Foxes tribes and the US government. Each of these treaties was subsequently broken.”