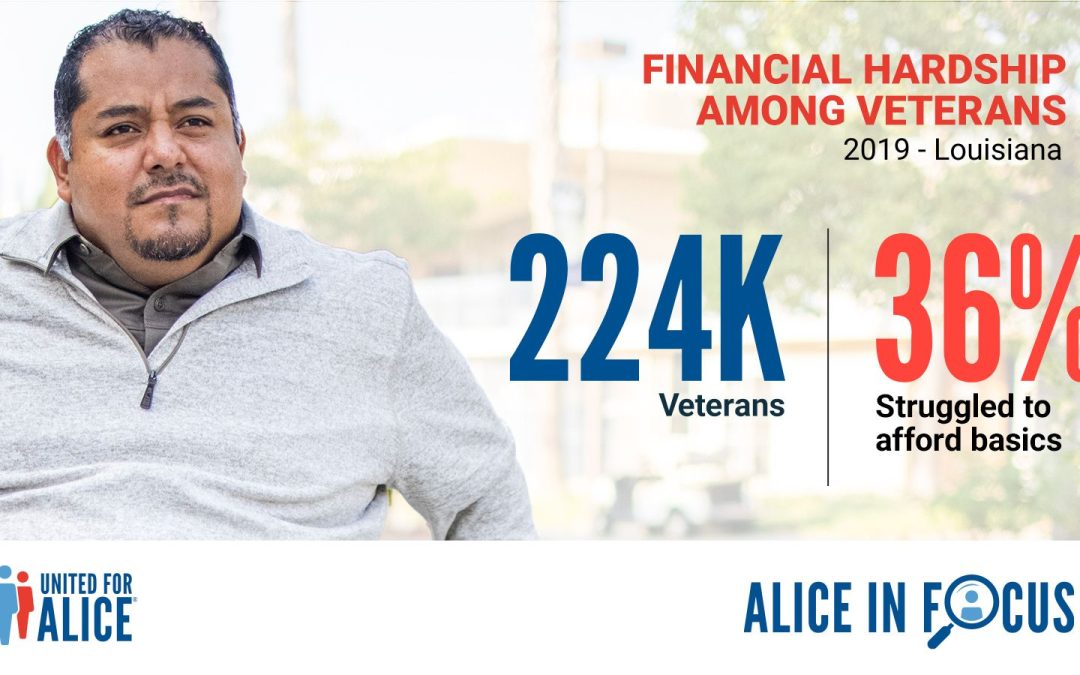 New ALICE report reveals that Louisiana has the highest rate in the U.S. of financially insecure veterans

SHREVEPORT, LA– They’ve served and sacrificed for our country, yet more than one-third -36%- of Louisiana’s 224,516 veterans struggle to afford the basics, according to a new report from United Way of Northwest Louisiana (UWNWLA) and its research partner United For ALICE.

In 2019, while 9% of the state’s veterans were deemed in poverty, 27% — three times as many — were ALICE (Asset Limited, Income Constrained, Employed). ALICE households earn more than the Federal Poverty Level but less than what it costs to live and work in the modern economy. Combined, 36% of Louisiana’s veterans were below the ALICE Threshold of Financial Survival, with income that doesn’t meet the basic costs of housing, child care, health care, transportation, and a smartphone plan.

“Our freedom comes with the responsibility to ensure that those who have served and sacrificed don’t struggle to make ends meet once they return home,” said UWNWLA President & CEO LaToria Thomas. “Although veterans have additional supports, clearly there’s still room for improvement.”

The ALICE in Focus: Veterans report and interactive tools reveal that while veterans show lower rates of financial hardship than individuals who never served, Louisiana’s veterans face some tougher financial hurdles than their counterparts in Texas and Mississippi.

In addition, just 13% of Louisiana’s financially insecure veterans participated in the Supplemental Nutrition Assistance Program (SNAP), compared to 17% in Texas.

Nonetheless, there are some lessons to be learned from the data, said United For ALICE National Director Stephanie Hoopes, Ph.D. The state’s veterans are slightly better off than nonveterans, with 36% struggling to make ends meet compared to 46% of adults who never served.

“Veterans have higher rates of full-time employment, are more likely to be homeowners, and have more comprehensive health insurance coverage and disability benefits,” Hoopes said. “This suggests that the supports afforded veterans are making a difference and could provide invaluable insights for developing strategies that help nonveterans facing financial hardship.”

Other findings from ALICE in Focus: Veterans include:

About United Way of Northwest Louisiana

For more than 100 years, United Way of Northwest Louisiana has improved the lives of individuals in our community. The organization fights for the health, education, financial stability, and essential needs of everyone while helping those in crisis. United Way of Northwest Louisiana serves agencies throughout a ten-parish region and operates a dozen human service programs of their own. Each United Way organization operates independently of each other and makes decisions by local leaders.

About United For ALICE

United For ALICE is a driver of innovation, research, and action to improve life across the country for ALICE (Asset Limited, Income Constrained, Employed) and for all. Through the development of the ALICE measurements, a comprehensive, unbiased picture of financial hardship has emerged. Harnessing this data and research on the mismatch between low-paying jobs and the cost of survival, ALICE partners convene, advocate, and collaborate on solutions that promote financial stability at local, state, and national levels. This grassroots ALICE movement, led by United Way of Northern New Jersey, has spread to 24 states and includes United Ways, corporations, nonprofits, and foundations in Arkansas, Connecticut, Delaware, Florida, Hawai‘i, Idaho, Illinois, Indiana, Iowa, Louisiana, Maryland, Michigan, Mississippi, New Jersey, New York, Ohio, Oregon, Pennsylvania, Tennessee, Texas, Virginia, Washington, Washington, D.C., West Virginia, and Wisconsin; we are United For ALICE. For more information, visit: UnitedForALICE.org.