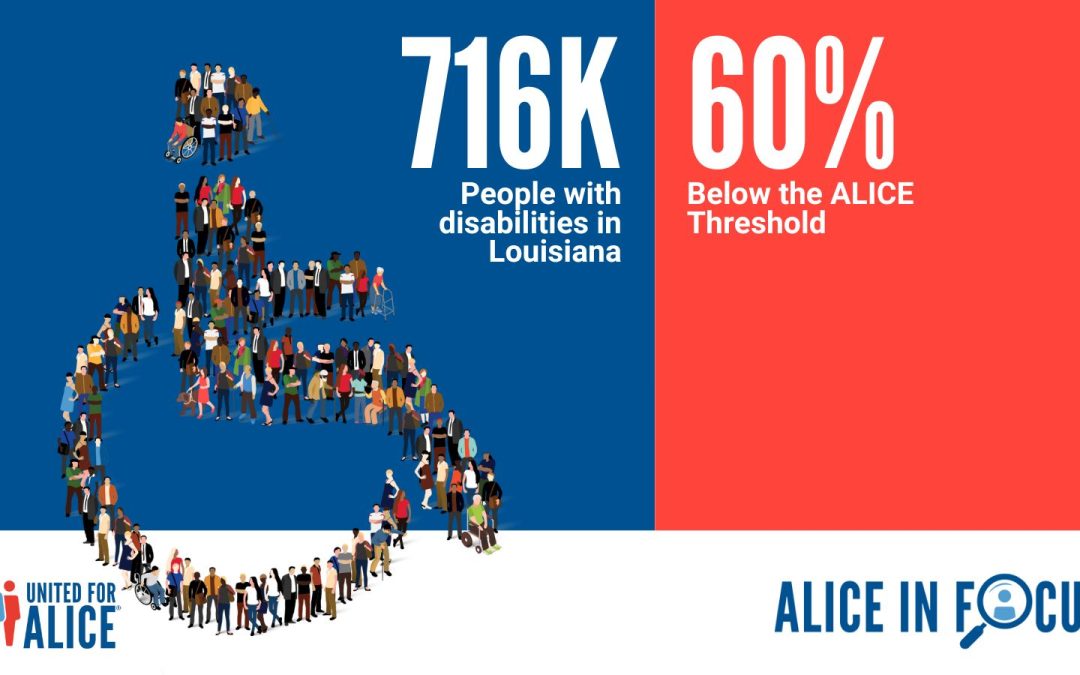 New report reveals that federal poverty data significantly undercounts how many people with disabilities are struggling to afford the basics.

(Shreveport, LA) – The number of people with disabilities in Louisiana who struggle to afford the basics is far higher than federal poverty data indicates — 60% compared to 24% — according to a new report from United Way of Northwest Louisiana and its research partner United For ALICE.

In 2019, while 24.4% of residents with disabilities were living in poverty, an additional 35.1% were ALICE (Asset Limited, Income Constrained, Employed). ALICE households earn more than the federal poverty level but less than what it costs to live and work in the modern economy. Combined, 60% of Louisiana’s residents with disabilities live below the ALICE Threshold, with income that doesn’t meet the basic costs of housing, childcare, health care, transportation, and a phone plan.

“On the 32nd anniversary of the Americans with Disabilities Act, we see that residents with physical, mental or emotional conditions who are struggling financially are not only being undercounted but underserved,” said United For ALICE National Director Stephanie Hoopes, Ph.D. “There is still work to do, as having a disability puts individuals at substantial risk for financial instability, more than many other factors. Daily, and even more so during the COVID-19 pandemic, these individuals face barriers to accessing a quality education, secure jobs, and critical support.”

The ALICE in Focus: People With Disabilities report and interactive tools reveal that during the pandemic, people with disabilities below the ALICE Threshold were four times more likely to be anxious than those without disabilities.

The new research also shows that outdated federal guidelines prevent the majority of residents with disabilities who are living in financial hardship from accessing critical public assistance. According to the new report, a staggering 82% of residents with disabilities below the ALICE Threshold did not receive Supplemental Security Income (SSI). The program requires that recipients have income below the poverty level, are unable to work, have a “severe” impairment, and have less than $2,000 in their bank accounts, or less than $3,000 if they are a married couple.

“Income eligibility requirements for SSI haven’t been updated in nearly four decades, which is one of the primary reasons why more than 348,000 residents were disqualified from receiving a much-needed financial lifeline,” said UWNWLA President & CEO LaToria Thomas. “By using data that takes into account the true cost of living, we can establish critical supports that help those who need it the most.”

Other findings from ALICE in Focus: People With Disabilities include:

Hoopes also pointed out that rates of hardship are likely even higher than could be counted, as data is not available for individuals living in nursing homes, correctional facilities, and other group settings.

About United Way of Northwest Louisiana

For more than 100 years, United Way of Northwest Louisiana has improved the lives of individuals in our community. The organization fights for health, education, financial stability, and essential needs for everyone, while helping those in crisis. United Way of Northwest Louisiana serves agencies throughout a ten-parish region and operates a dozen human service programs of their own. Each United Way organization operates independently of each other and makes decisions by local leaders.

About United For ALICE

United For ALICE is a driver of innovation, research, and action to improve life across the country for ALICE (Asset Limited, Income Constrained, Employed) and for all. Through the development of the ALICE measurements, a comprehensive, unbiased picture of financial hardship has emerged. Harnessing this data and research on the mismatch between low-paying jobs and the cost of survival, ALICE partners convene, advocate, and collaborate on solutions that promote financial stability at local, state, and national levels. This grassroots ALICE movement, led by United Way of Northern New Jersey, has spread to 24 states and includes United Ways, corporations, nonprofits, and foundations in Arkansas, Connecticut, Delaware, Florida, Hawaii, Idaho, Illinois, Indiana, Iowa, Louisiana, Maryland, Michigan, Mississippi, New Jersey, New York, Ohio, Oregon, Pennsylvania, Tennessee, Texas, Virginia, Washington, Washington, D.C., West Virginia and Wisconsin; we are United For ALICE. For more information, visit: UnitedForALICE.org.