The Free Coalition is kicking off a social media campaign in January, 2017 to raise awareness about human trafficking in the Shreveport-Bossier Community (Lex Talamo/The Times)

A quarterly amending of the anti-trafficking FREE Coalition meeting was attended by about two dozen community partners.
(Photo: Lex Talamo)

January is National Human Trafficking Prevention month, and area nonprofits and law enforcement agencies are increasing their efforts to raise awareness about the sexual slavery happening in Louisiana.

About two dozen partners of the Free Coalition, Shreveport’s coalition to end human trafficking, met recently to discuss a strategic plan for 2017 that includes kicking off a social media campaign.

“Our goal for the month is to spread awareness of the realities of trafficking in our community and to send a message to survivors, buyers and traffickers that our community stands against trafficking and stands with survivors,” said Shobana Powell, leader of the FREE coalition.

The United Way of Northwest Louisiana covered the costs of creating the signs, as well as billboard space throughout the month of January for the Free Coalition to spread its message against human trafficking. 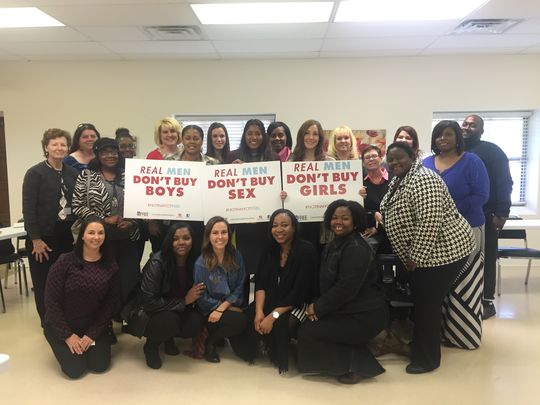 “The United Way is concerned on a community-wide level about what’s happening. No one’s talking about this right now,” said Lynn Nelson-Stevens, the United Way’s chief operating officer. “It’s a black eye for the community. We knew we had to get the conversation.

Powell said the average age for individuals to enter the sex industry is 12 to 14 years old. She added that members of the FREE coalition have worked with trafficking victims in Shreveport-Bossier who are as young as six years old.

“It is imperative that we educate our community to protect our children,” Powell said. “Survivors of trafficking have shared with me over the years that there were so many times they remember being in public among everyday people, and no one noticed their pain or reached out to them.”

In addition to the social media campaign, the FREE Coalition will host a proclamation day in January to call for public engagement in the fight against trafficking and also the training of all middle school teachers in how to identify human trafficking in their classrooms.

RELATED: Children sent out of state for psychiatric care

“There are so many more victims who go unrecognized,” Powell said. “It is through education that we widen our safety net, which leads to the identification and recovery of more victims.”

January will also see the kickoff of a T-shirt fundraising campaign. T-shirts are $15 and read “#NotInMyCitySBC: National Human Trafficking Awareness” and can be ordered online from the local YWCA website through Dec. 27. 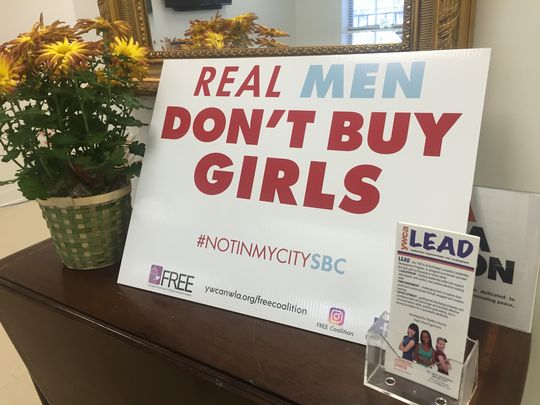 A sign that is part of the Free Coalition’s social media campaign. (Photo: Lex Talamo)

The coalition also is taking nominations through Dec. 20 for awards to be given to two agencies, one in Caddo Parish and one in Bossier Parish, that have demonstrated exceptional anti-trafficking work.

Other highlights of the meeting included:

To submit a nomination for the FREE Coalition’s anti-trafficking awards, fill out the form and submit to spowell@caddo.org by Dec. 20.

To see what the FREE Coalition is doing during January’s awareness month, connect through Facebook at www.facebook.com/freenwla or through Instagram at @freecoalition.

This story originally appeared in the Shreveport Times here. Reposted with permission.